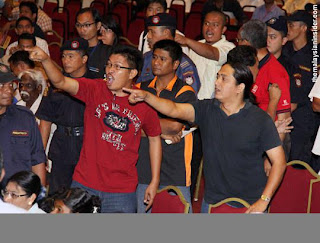 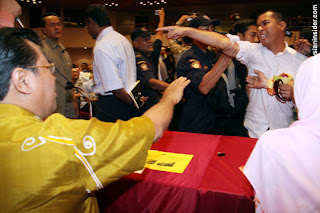 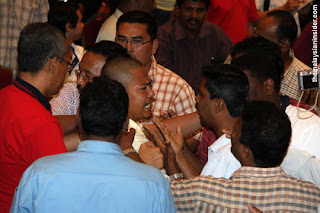 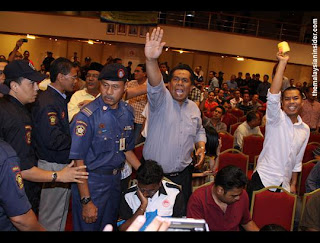 
Both the Federal and Selangor governments are separately scrambling to contain the fallout from last Friday’s cow-head protest held by a group who oppose a plan to relocate a 150-year-old Hindu Temple to Section 23 here.

While the state government is hosting a dialogue session with all residents this Saturday, the Barisan Nasional (BN) federal government is also considering holding an event to bring both Muslims and Hindus together to defuse racial tension.

The plan, which entailed roping in the assistance of Hindu Sangam, was proposed to the Cabinet by Agriculture and Agro-based Industry Minister Datuk Noh Omar, who is also the Umno state deputy liaison chief.

According to sources, the Cabinet is also considering offering an alternative site to relocate the Hindu temple despite the fact that such matters fall under the jurisdiction of the state government.

The Malaysian Insider understands that Noh was forced to defend himself at the Cabinet meeting yesterday. He told the meeting that he did not instigate the Malay-Muslims of Section 23 to protest against the temple relocation.[Malaysian Insider]

Rescuers in Indonesia are searching the rubble of collapsed buildings for survivors after a powerful earthquake, with the toll expected to rise.

At least 44 people are confirmed dead and thousands of homes ruined after the 7.0-magnitude quake hit on Wednesday.

More than 300 people have been injured and dozens are still missing.

Indonesian officials say heavy rescue equipment has arrived in the Javanese city of Cianjur, where many people are feared buried by a landslide.

Elsewhere, police, military personnel and villagers are using their bare hands to try to reach survivors buried in the rubble.

Thousands of buildings have collapsed in Cianjur, about 100km (62 miles) south of Jakarta, and the nearby town of Tasikmalaya.

"We are still searching for the survivors who might be buried under their houses or buildings," another disaster management agency employee, Maman Susanto, told AFP news agency.

Rescue efforts are being hampered as several roads have been badly damaged, the BBC's Karishma Vaswani reports from the area.

As a result, heavy digging equipment has not reached the hardest-hit villages, she adds.

Indonesian President Susilo Bambang Yudhoyono is due to visit the area later on Thursday.

Communications links to settlements on the south coast were broken by the quake, so the extent of damage and casualties is not yet known.

About 5,000 people have reportedly sought shelter in makeshift tents. "They have taken refuge not only because their houses were ruined, but also because they fear there will be aftershocks," said local official Obar Sobarna.

The quake epicentre was about 115km off the south coast of Java, near Tasikmalaya.

Mudslides have inundated homes, collapsed rooftops and damaged properties in Tasikmalaya, including the mayor's home and a mosque.

The tremors were felt in the capital, Jakarta, 200km to the north, where hundreds fled into the streets from offices and shops.

A local tsunami alert was issued but revoked shortly afterwards.

The quake was also felt 500km away from its epicentre in Surabaya, Indonesia's second-largest city, and on the resort island of Bali.

In December 2004, an earthquake off the coast of Sumatra in Indonesia triggered a tsunami that killed more than 200,000 people around Asia.

Our correspondent says memories of the 2004 disaster are still fresh in the minds of people.

She says the Indonesian government has implemented an early warning system for tsunamis since then, but it is not fully operational yet.

Indonesia sits on the Pacific Ring of Fire, one of the most active areas for earthquakes and volcanic activity in the world. 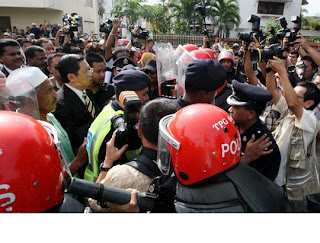 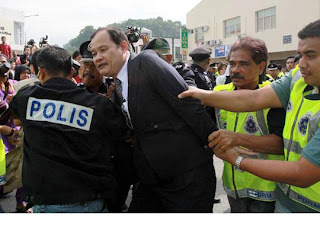 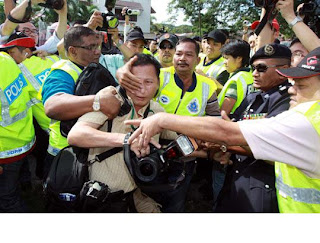 The pandemonium outside the state secretariat as police cordon the building from PR assemblymen.

IPOH, Sept 2 — Pakatan Rakyat’s (PR) state assembly sitting today approved a decision by its rights and privileges committee to arrest and jail for six months Barisan Nasional (BN) Speaker Datuk R Ganesan and his deputy Hee Yit Foong for their role in the May 7 fracas.

The two were also fined RM500,000 by the assembly, which convened at the Heritage Hotel here with 23 PR lawmakers after they were forcibly stopped from entering the state secretariat building this morning.

Ganesan and Hee, who had defected from DAP, were elected to their posts after policemen removed Sivakumar by force at the state assembly sitting on May 7. Their appointments remain contentious because they were voted in amid chaotic scenes before Raja Nazrin Shah declared open the assembly.

Since then, Sivakumar has maintained that he remains the legitimate Speaker of the state legislature.

Today’s sitting, while slammed by Barisan Nasional (BN) as a political ploy, is a move by PR to maintain the stand that it still legitimately controls the legislature nearly nine months after a controversial power grab that is still being disputed.

Sivakumar presided over the assembly with no BN assemblymen present, even though sitting was arranged for them.

After the vote on Ganesan and Hee, the PR Speaker issued a directive for the police to take action and arrest the duo, but this is not likely to be executed as the authorities have said they do not recognise the sitting.

Among the other decisions made by the rights and privileges committee which was passed by the sitting today include further suspensions of BN Mentri Besar Datuk Seri Zambry Abd Kadir, senior executive councilor Hamidah Osman and five other BN exco members.

With no way in, the PR legislators head to a hotel instead to hold their assembly.

The sitting also approved the membership to three legislative committees — on rights and privileges, public accounts and standing orders — with nominations made for one BN representative in each panel.

A final emergency motion condemning the actions taken by the police earlier this morning as well as the role played by the BN administration in preventing lawmakers from entering the state secretariat was also passed.

The PR lawmakers, including former mentri besar Datuk Seri Nizar Jamaluddin, who was ousted by BN in the power grab, were engaged in a scuffle with riot police before eventually dispersing.

Three other members of the public, believed to be PR supporters, were also detained.

Keshvinder, who sustained injuries during the scuffle, has been taken to hospital.

Police had rolled out barbed wire and placed riot police with water cannons around the Perak state assembly, brandishing a court order barring assemblies within 30 metres of the area.

PR lawyers had tried in vain this morning to set aside the court order, but could not obtain an appointment with any magistrate.

Sivakumar had called for the sitting six months — as required by law — after the last sitting that was forced to be held under a rain tree.[MALAYSIAN INSIDER] 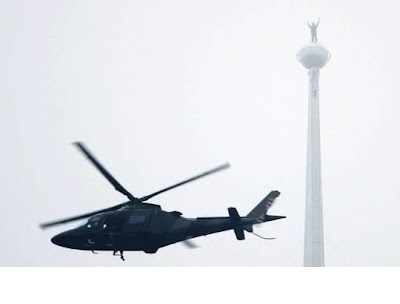 Manager Arsene Wenger has accused Manchester United of adopting "anti-football" tactics during Saturday's 2-1 victory over his Arsenal side.

He said: "I have seen a player make 20 fouls without getting a yellow card.

"If you have seen the game, you don't need me to tell you who but their player gets away without a yellow card. It's quite amazing," stormed Wenger.

After a 2-0 defeat at Old Trafford in 2004, Wenger claimed United had directly targeted his players.

The referee, from the Wirral, issued nine yellow cards during the game, with six going to Arsenal, who will now face a Football Association fine for failing to control their players during the fixture.

But with United midfielders Darren Fletcher and Michael Carrick emerging from the game without bookings, Wenger claims that persistent fouling has now become a greater problem than diving.

That has become a hot topic again following Uefa's decision to charge Gunners forward Eduardo for simulation during the Champions League victory against Celtic last Wednesday.

Another Arsenal player, Emmanuel Eboue, was cautioned for diving on Saturday.

But Wenger said: "I have seen today a player [Eduardo] who plays only on the pitch, but there are other points that for me are more urgent - players who play only to make fouls, who make repeated fouls and are never punished.

"They get out of the game without a yellow card, but I think it is more anti-football than a player who did what Eduardo did.