CCTV baru next year nak install
Posted by Hamirdin b Ithnin at 9:59 PM

Athi Shankar  | April 6, 2011
The sex video has whipped up a storm in Facebook, with many commentators casting doubts on the male actor.

GEORGE TOWN: Two days after a short version of the sex video implicating Opposition Leader Anwar Ibrahim found its way in YouTube, a majority of commentators in social network Facebook are unconvinced that the main male actor was Anwar.
Indeed if feedbacks from Facebook were anything to go by, the 1.47-minute snippet has backfired on its perpetrators.
“The guy on the tape is definitely not Anwar,” said many Facebook account holders after two days of relentless debates, attacks, criticisms and discussions in several forums on the sex video.
Inevitably, former Malacca chief minister Rahim Tamby Chik, Kedah-based businessman Shazryl Eskay Abdullah and Perkasa treasurer Shuib Lazim came under heavy fire from the Facebook commentators.
The three “Datuks” have openly claimed they were the masterminds behind the sex video.
But now they are the Facebook “fall guys” in the scandal.
All sorts of criticisms and labels have been levelled at them for the “disastrous sex scandal foray”.
They were labelled as “Three Stooges”, “Three Musketeers” and “Tiga (three) Abduls”.
‘Coincidence or plotted script?’
Umno was surely at the receiving end of the Facebook outrage because many believe that the party top brass was behind the sex video, although the allegations remained to be proven.
Some questioned the timing of the video leak to YouTube, just two days after Inspector-General of Police Ismail Omar told the press that police probe had revealed that the video was authentic.
“Was it a coincidence or a plotted script?” asked many.
Several cyber forum hosts, dubbed as “Umno cyber Trojans”, who tagged the leaked video clip on their links, also came under fire for attempting to convince Facebook account holders that “Anwar had been caught literally with his pants down”.
The hosts were taken aback by the fiery reactions and eventually silenced by the strong criticisms from the commentators.
Indeed, the hosts appeared have gone missing for long periods while debates were raging fiercely over the sex tape.
Certain interested parties would argue that the anti-video critics were Anwar or PKR “cyber Trojans”.
But, if one has been long enough in Facebook, one would be convinced that even neutrals, supporters and members of Barisan Nasional (BN) remained unconvinced that it was Anwar.
Some even suggested that “the male actor and prostitute looked like Thais”.
Dubious features
The patrons raised many interesting questions on the clip, including why it was in black and white, and not in colour.
They raised questions about the many dubious features in the video, including the standard of the hotel room, its paraphernalia, especially the bed, and the appearance of a third person.
Some suggested that the hotel could be in Thailand.
“Don’t tell me Anwar would go to such a low-class budget hotel. Even I won’t go for it,” said many.
Several others also questioned the presence of the third person, a male, in the video prior to the sexual acts.
“Why was the person there? Was he directing the whole scene? Or was he a pimp?” asked many.
Certain Islamist-typed commentators slammed Umno and its alleged cyber Trojans for mocking Islamic virtues by stooping so low and resorting to malicious lies to undermine an opposition leader.
Several of them suggested that the sex video was produced to help Umno win convincingly in the Sarawak state election.
But they claimed that the sex scandal could help Pakatan Rakyat win over neutrals in future electoral battles.
“The sex video could help the opposition more than the BN in Sarawak. It also could backfire on Umno and BN in the next general election,” they claimed.
Posted by Hamirdin b Ithnin at 4:21 PM 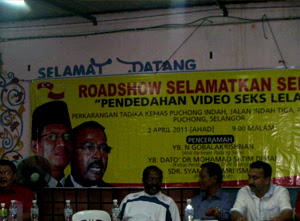 betul la tu
Posted by Hamirdin b Ithnin at 2:55 PM