SELAMAT MENYAMBUT RAMADHAN
Posted by Hamirdin b Ithnin at 3:52 PM 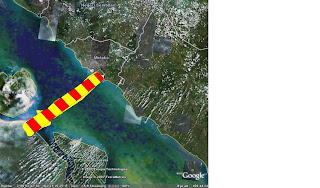 Tan Sri Muhyiddin Yassin does not deny allegations of having used a military helicopter to fly from one Umno function to another. — file pic

Deputy Prime Minister Tan Sri Muhyiddin Yassin dismissed a corruption complaint filed by PKR over his use of a military helicopter to attend Umno meetings in Sabah.

The deputy Umno president did not, however, offer any explanation as to why he used a military helicopter to fulfill his party duties.

“It (the allegations) does not scare me at all. It is a blatant example of how short on ideas Pakatan (Rakyat) are that they have to start coming up with something like this,” he told reporters here today when asked to comment on PKR’s recent allegations of corruption against him.

Yesterday, PKR Youth leaders lodged a complaint against Muhyiddin with the Malaysian Anti-Corruption Commission (MACC) over his alleged abuse of government property for personal use.

This was first highlighted by the news agency Bernama when the DPM flew on a military helicopter to attend the Penampang UMNO division meeting in Sabah after he officiated another division party meeting in Kudat.

PKR Pantai Jerjak assemblyman Sim Tze Min, who lodged the report, said that the news coverage had clearly shown that Muhyiddin was abusing government property for a non-governmental purpose, which was tantamount to corruption.

However, the No.2 leader in the government appeared unfazed by the accusation.

“These are views that they should just keep to themselves as they are purposely creating a lot of problems for people,” stated Muhyiddin.[Malaysian Insider]

According to the Malaysian Bar website, he was disbarred on March 7 last year. This means that he cannot practise as a lawyer or appear before a court

Baca lagi maklumat tambahan
Posted by Hamirdin b Ithnin at 11:00 AM 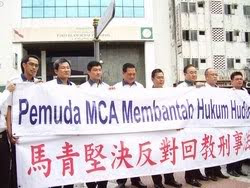 The world’s fastest man took a staggering 0.11 seconds off the 9.69 mark he set winning gold at the Beijing Olympics a year ago to the day, taking the event into a time zone undreamed of before his arrival on the scene.

American Tyson Gay, the 2007 world champion, ran the race of his life to finish second in 9.71, the third fastest time ever. Jamaican Asafa Powell claimed bronze in 9.84.

In contrast to the Olympic final, when he was able to coast over the line, Bolt saved his celebrations until the race was actually finished.

He was pushed a little harder this time, though his victory on the blue track at the Olympic Stadium was never in doubt as he completed the set of major medals at the distance.

The 100 metres record usually comes down by one or two hundredths of a second at a time, making the bite Bolt took out of it on Sunday simply astonishing.

“I don’t run for world records,” a relaxed Bolt, 22, told reporters. “The aim was just to come out here and execute because it was going to be a tough race.”

“I said anything could happen and it did. It was a big target but I got 9.58 and I am really happy with myself.”

Bolt will now pocket US$100,000 (RM351,758) from the International Association of Athletics Federations for his world record but that is a mere fraction of what sponsors will now be ready to pay for him.

Bolt, who false-started in the semi-final, made a flying getaway in the final and was clear after only 20 metres.

He crossed the line with one eye on the clock before pounding his chest and blowing kisses to the crowd.

He hugged his friend Powell and completed a lap of honour roared on by some 70,000 cheering fans.

“Today was perfect. This gave me a lot of energy. Especially the crowd,” Bolt said through the stadium microphone, immediately after the race. “I won’t forget it.”

Bolt, five days shy of his 23rd birthday, had pledged to wrestle the only major title still missing from his now perfect collection away from Gay, but had complained his preparation was plagued by rain and wind in the European meetings he ran.

He also had to undergo minor surgery to remove thorns from his foot in April, after stepping on them following a car crash.

BAKUN: An environmental crisis may be looming in Sarawak following revelations that the developer of the Bakun Hydroelectric Dam plans to set fire to an area the size of Singapore.

Sarawak Conservation Action Network coordinator Raymond Abin told The Star yesterday that it had information that the burning of the leftovers in the 64,000ha area had begun as a prelude to the flooding of the reservoir.

“We are shocked that the entire reservoir area will be set on fire in order to clear all the leftovers.

“The reservoir is the size of Singapore. Imagine the havoc to the environment if the burning is allowed to be done in such a huge area.

“This is a shortcut for the developer as a way of getting rid of the debris instead of carting it away,” he said, adding that contractors were already setting fires to the debris and burning it to ashes at various locations within the reservoir area.

The developer, Abin pointed out, could have carted the debris out but such a measure would take a long time and is expensive.

“An environmental crisis is waiting to happen in Bakun if the authorities do not step in and stop this,” he said, adding that the burning could cause large-scale air pollution and destruction of whatever was left of the Bakun ecosystem.

“The recent fires and haze episode in Miri which have caused air pollution for a whole month showed how much damage such burning can cause to the environment and to humans,” he noted.

The network is a coalition of more than a dozen environmental and native rights action groups, including the Borneo Resources Institute, the Indigenous Peoples’ Deve-lopment Centre and the Customary Rights of Sarawak’s Indigenous People Network.

Abin said the dam developer, Sarawak Hidro, was rushing to clear the reservoir area of debris because the impoundment of the dam was set for October.

TO ALL FREINDS, JUST A SMALL BUT MEANINGFUL INFO FM ME TO YOU AND YR FRIENDS...MY PERSONAL EXPERIENCE OF H1N1 SINCE IT PRACTICALLY HIT US LIKE A TIME BOMB.....

My staff was crying herself sick on Tuesday morning...was told that her son was confirmed of H1N1 in his Uni at Kangar, Perlis...worse was that when he was bedridden 2 days the warden didnt even bother to sent to hospital till his dad came fm KL and with his friends assistance brought him to GH Kangar...


No one bothered in the hospital and he was put in the normal ward for another 2 days!!! (imagine the amount of people he has infected!!) .....after 2 days and his eyes were turning yellow and saliva greenish...he was put in quarantined room...

His mom practically fainted just telling me the story.. cant do much cos she does not have enough money to go to the north with the father...

First thing we did was made her call the hospital and insist that they sent him to Sg.Buloh Hospital or any other hospital in KL since they seemed to be more alert and more equipt...they refused of course...so I sent her off to Kangar the same day to solve the problem.

Whilst this was happening, I had a call from one Ustaz who was in town to "help cure" another H1N1 child in Shah Alam....and was told this simple prescription by him.....

EAT MINIMUM 6 GREEN APPLES A DAY AND FRESH ORANGE JUICE
for those with sore throat please blend the apples and keep on taking till your fever disappear and yr symtoms are gone....I cannot explain it but the child in Shah Alam was ok too after taking this tip....

my staff's son was given the apple juice for the whole day on Monday/Tuesday and he was out of the fever yesterday Wednesday... .she called me and was crying on the phone to say that her son was out of ICU and was able to eat normally...all these happened within just 4 days today (thursday 6 august)...

This is just to share with my fellow sisters and brothers and hope this small info could assist others as well, No harm in trying and anything can happen!!!!
Posted by Hamirdin b Ithnin at 9:27 AM