A study released this week by Malaysia's Center for Independent Journalism in conjunction with the UK-based University of Nottingham, found just how biased the mainstream media can be. Drawing from data gathered the week of April 7-15, the chart below shows the ruling Barisan Nasional, or BN, getting 97.5 percent favorable or neutral coverage in the mainstream media, against less than 20 percent for the opposition Pakatan Rakyat coalition. 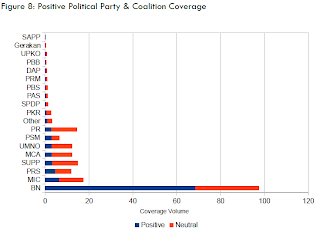 PETALING JAYA: Vowing not to forgive the Barisan Nasional candidate for Shah Alam, MIC vice- president M Saravanan has advised Indians not to vote for the Perkasa leader.
“I will never forgive him (Zulkifli). I will continue to tell Indians not to vote for him, he doesn’t deserve their votes.
“If I were to say something disrespectful towards Muslims or their beliefs and then apologise, do you think they will accept it?” he asked.
“It is the same, we are Malaysians and the thought of disrespecting other religion should never even cross our mind.
“I respect the Prime Minister’s (Najib Tun Razak) choice. But his candidacy degrades BN on the whole, he is a disgrace to the party,” said Saravanan, who is contesting the Tapah parliamentary seat.
In an old video clipping which surfaced recently, Zulkifli had questioned the Hindu concept of God and mocked the Ganges River, which is considered sacred by Hindus.
“I have been to Sungai Ganga before. How can you say it’s pure? There are chicken carcasses and small sticks floating,” Zulkifli had said in the video clip.