Shazryl fails to get his RM20 million

By Yow Hong Chieh
KUALA LUMPUR, May 5 — Datuk Shazryl Eskay Abdullah walked away empty-handed today after the High Court here dismissed his RM20 million suit against Merong Mahawangsa Sdn Bhd and its executive director Datuk Yahya A. Jalil over his role in the Johor crooked bridge deal.
Shazryl filed suit in January 2002 claiming breach of contract by Merong Mahawangsa and Yahya for failing to pay him RM20 million after he helped procured the rights to the Malaysia-Singapore International Gateway (SIG) bridge project.

Shazryl (picture) had earlier testified that in addition to approaching the late Tan Sri Megat Junid Megat Ayub for help, he had also helped Yahya gain access to then-Deputy Prime Minister Datuk Seri Anwar Ibrahim.
Yahya admitted having a casual meeting with Anwar at the former minister’s house with Shazryl in 1998 but could not recollect discussing the bridge.
However, Yahya denied he had sought help from Shazryl and told the High Court that the plaintiff had voluntarily offered his services instead.
Yahya also did not agree that Shazryl had helped him in through letters to Anwar, Megat Junid and the Economic Planning Unit (EPU) on the SIG project. 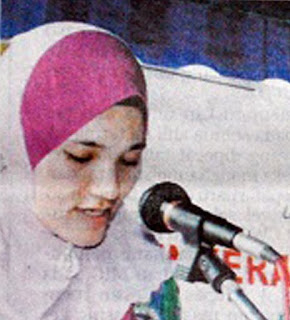 Azmin: Senior cop behind the Umno slander-Anwar lectures to teachers

UPDATED PKR vice president Azmin Ali has exposed a top police officer, Senior Assistant Commissioner Abdul Rahman Ismail, as the man behind a series of defamatory lectures to teachers including the latest sex video conspiracy and sodomy accusations against Opposition Leader Anwar Ibrahim.
"What this implies is clear for all to see. If there is no police or government involvement, why is this SAC giving lectures to teachers and telling them that Anwar is guilty," Azmin told a press conference on Tuesday.
Abdul Rahman is the assistant director for research and the secretariat of the police Special Branch at Bukit Aman.
The sex video scandal erupted in late March, the same day that the Sarawk legislative assembly had been dissolved to pave the way for the 10th state election where the Pakatan Rakyat had swept an unprecedented 15 seats despite the Anwar smear campaigns and huge electoral fraud.
Three Umno members, namely businessman Shazryl Eskay Abdullah, former Malacca chief minister Rahim Thamby Chik and Perkasa treasurer Shuaib Lazim, have admitted to being the Datuk T trio which screened the video to a group of journalists and select PKR leaders.
Their purpose was to force Anwar and his wife PKR president Wan Azizah Wan Ismail to resign from politics.
Police told teachers Anwar was guilty
Anwar has accused the BN government of plotting the conspiracy to discredit him and the Pakatan ahead of the coming general elections.
According to Azmin, 4 seminars have been carried out so far involving 2,000 principals and teachers in Kelantan. Each school had been asked to send one principal and 8 teachers.
"Abdul Rahmah was not giving lectures on national security but was acting as a slander agent for Umno and elaborating on the sex and pornographic accusations thrown at Anwar and also with regard to the Memali incident," said Azmin.
"Abdul Rahman had also judged Anwar as a sodomist and a man who goes after prostitutes. Why is a senior officer involved in giving political lectures and repeating the cheap propaganda lies of the Umno-BN."
Distributing and screening pornographic material in public is a crime in Malaysia punishable with jail of up to 5 years. So far, despite the Datuk T's public confession, police have refused to arrest or charge them.
This has further compounded public suspicion of a conspiracy between the enforcement authorities and the Umno-BN, which has ruled Malaysia for the past 5 decades.
Posted by Hamirdin b Ithnin at 9:23 PM

The World Bank pointed out there were more than 1 million Malaysians who now live abroad and 43 per cent were unwilling to return due to the BN government's racial policies.
Who started it
The flight of non-Malay capital and skills began during Mahathir's time in power. He ruled the country from 1981 to 2003 and has been accused of worsening racial polarisation with divisive policies aimed to mask the massive corruption in his government.
Earlier on, he had taken another swipe at Anwar, accusing him of sacrificing Malay unity for the sake of political ambition.
The 63-year old Anwar had been his deputy and also the finance minister. In 1998, fearing Anwar might challenge him for the country's top job, Mahathir jailed him on manifestly fabricated sodomy charges.
Anwar was often praised by both the International Monetary Fund and the World Bank for taking steps to prepare the economy for globalization and competition.
But Mahathir, who had insisted on protectionist policies that helped family-linked and crony firms, accused Anwar of selling out his own race to win political favour and become prime minister.
Melayu mudah lupa... satu skema mahathir
"The Malays easily forget. They should learn from history on how the British had controlled the Malay Rulers and split Malay unity by forming the Malayan Union. That's the reason why Umno was set up. To unite the Malays ... but there are still people willing to break up the party which belongs to their own race," Mahathir said in his keynote address at a Perkasa function on Saturday.
- Malaysia Chronicle
Posted by Hamirdin b Ithnin at 9:04 AM