Apabila Lee Kuan Yew datang ke Kuala Lumpur, beliau juga memasukkan dalam iternarari pertemuan dengan Rosmah. Bila ditanya kenapa beliau bertemu dengan Rosmah, jawapannya ialah: Lee said he called on Rosmah because he had been told that she and her husband worked as a team and it was necessary for him to understand both members of the team.

“I emphasised to both that cooperation has to be long term, not chop and change, and it has to be across the board, you can’t just pick and choose,” he said. –The Straits Times

Posted by Hamirdin b Ithnin at 11:30 PM Links to this post

Posted by Hamirdin b Ithnin at 6:00 PM Links to this post 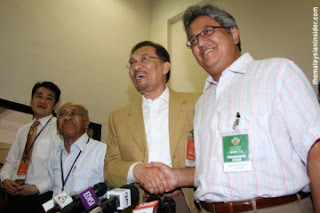 Diterima?
Posted by Hamirdin b Ithnin at 4:00 PM Links to this post

Malaysia is blessed with bountiful natural resources to be exploited and to take benefit from. We all should thank Allah for all these blessings.

Malaysia's crude oil output has fallen to 550,000 barrels per day (bpd) this year from 600,000 bpd in 2008, as ageing fields took their toll after years of steady production levels, Petronas' chief said today.

Overall output for both crude oil and condensates fell to 650,000 bpd versus 700,000 bpd last year, Tan Sri Mohd Hassan Marican, Petronas chief executive, told Reuters in an interview. Even 650,000 bpd is a lot of crude for a country the size of Malaysia.

New fields are due on stream in coming years, most notably Shell-operated Gumusut oilfield, expected to come on line in late 2010 and to ramp up output to 150,000 bpd.

Murphy Oil Corp said today it has made two additional discoveries in offshore Malaysia, one of them near its Kikeh field. the first discovery was made at the Siakap North prospect in Block K, offshore Sabah. The Siakap North discovery is 10km from Murphy’s Kikeh field in approximately 4,300 feet of water. The well encountered oil-bearing pay sands of a similar age and quality as Kikeh.

A second discovery was made at the East Patricia prospect in Block SK 309, offshore Sarawak. The well found approximately 230 feet of net natural gas and was drilled in 89 feet of water. East Patricia is 37km from the Bintulu onshore gas receiving facility under construction for the Sarawak natural gas development. Now that the war has been won, it is time to pluck its dividends. It is reported that in Selangor the tussle has already started as to who should get the contracts to clear the garbage. PAS party workers? or PKR's or DAP's?

Any different from the ever-hungry BN stray dogs?

The demand for waste management contracts to be distributed among Pakatan Rakyat (PR) supporters is seriously undermining the credibility of the Selangor government.

The Selangor administration is under siege from grassroots supporters who feel they are "entitled" to Alam Flora contracts, and PR leaders are split down the middle on the issue.

The existing contracts, which were given out to politically-linked companies by the previous Barisan Nasional administration, are expiring soon.

Allegations of political patronage are commonplace in the industry and many companies which previously obtained contracts act as agents who sub-contract out the actual work.

Over the last few months, there has been intense lobbying for the new contracts to be given to Pakatan-linked contractors.

Datuk Hassan Ali yesterday said he wants the new contracts to be given to people who need them as well as party supporters.

“Both should be given the opportunity,” said the Selangor executive councillor in charge of public amenities.

However, the Selangor PAS commissioner denied allegations by Petaling Jaya City Council (MBSJ) councillor A. Thiruvenggadam who claimed the state government had agreed to allocate waste management contracts on the ratio of 40 per cent to PKR and 30 per cent each to PAS and DAP.

Hassan said the final prerogative is still with Alam Flora although the state government can make recommendations.

He added that all parties who wish to obtain waste management contracts will have to register with the state economic planning unit which would then refer them to Alam Flora.

He added no new contracts have been given out as yet.

DAP’s Ronnie Liu said he is against the distribution of waste management contracts based on political affiliations.

“I will not allow it and will suggest the contracts be given out by balloting,” said the state executive councillor in charge of local authorities.

However, another PR politician who spoke to The Malaysian Insider said the state government was under pressure by leaders from PAS and PKR who want to keep the grassroots supporters happy.

“We will be no better than Barisan Nasional if we allow this,” said the politician, who declined to be named.

A spokesman for the state government said a special audit committee will be formed to ensure the contracts are only awarded to genuine operators.

The committee will work with Alam Flora officials to ensure brokers or agents are not appointed.

Regular checks and inspections will be carried out and companies found to be brokers will have their contracts terminated.

They want to curb this practice which was rampant under the previous state government, and the administration has no intention of continuing it.

“We hope these measures ensure that ratepayers get value-for-money services from contactors irrespective of political affiliation, race or background.”

The state is also studying strategies for a more transparent and accountable tender system for future contracts.[Malaysian Insider]

Posted by Hamirdin b Ithnin at 9:22 PM Links to this post 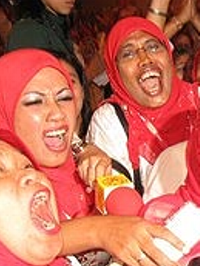 Posted by Hamirdin b Ithnin at 3:26 PM Links to this post

THIS IS THE WEDGE

Suasana ini sedang muncul semula dalam PAS. This is the wedge.
Posted by Hamirdin b Ithnin at 8:26 AM Links to this post

Nak lihat dan perhati sahaja?
Posted by Hamirdin b Ithnin at 10:06 PM Links to this post

She cited the example of how she felt left out due to Najib’s constant meetings with officials during their visit to China last week.

“I had to stay in the hotel in Beijing most of the time. He was very busy,” she recounted. “Saya pun hot (I got upset),” she said in a light-hearted manner.

Perdana play: Rosmah signing on a large replica of the book Najib Perdana Menteri ke6 at Wisma Kementah in Kuala Lumpur last night. Looking on are Zahid and his wife Datin Hamidah Khamis.

“When he came back, I told him that I wanted to return to Kuala Lumpur immediately.”

Rosmah, however, noted that Najib merely looked at her without a trace of anger in his face.

“Then I realised that it was just me talking. He did not raise his voice. All he asked was ‘Dah habis? (Are you done?)’” she said after launching a new book on Najib titled Najib Perdana Menteri ke-6 at the Defence Ministry yesterday.

Rosmah said she had also never seen or heard Najib raise his voice in anger at anyone.

Posted by Hamirdin b Ithnin at 5:55 PM Links to this post Termasuk presiden.
Posted by Hamirdin b Ithnin at 11:30 PM Links to this post 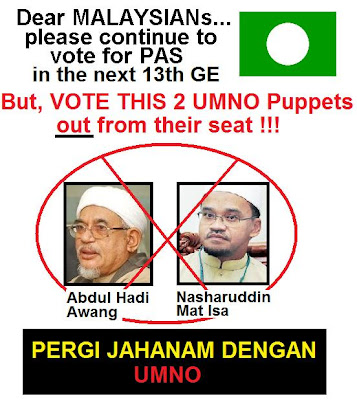 Posted by Hamirdin b Ithnin at 3:35 PM Links to this post

Posted by Hamirdin b Ithnin at 6:58 AM Links to this post