A DISCOURSE IN ISLAMIC STATE part(8)

In the hadith presented in part(7), components of Islam was potrayed as islam, Iman ane Ihsan. This should not be confused with the subdivision used in this discourse, because it is the same material but with some refinements. As mentioned in the hadiths, ihsan is described by the prophet s.a.w. as you should serve Allah as though you could see Him, for though yang cannot see Him yet He sees you.

Akhlaq is something that emanates from Ihsan. The word akhlaq is the plural for the word khulq which means disposition. "Disposition" is that faculty (malakah) of the soul which is the source of all those activities that man performs spontaneously without thinking about them. Malakah is a property of the soul which comes into existence through exercise and repetitive practice and is not easily destroyed.

وَإِنَّكَلَعَلىخُلُقٍعَظِيمٍ
and thou(standest)
On an exalted standard
Of character
(Al Qur'an 68:4)
Thus, Islam is a complete way of life which spans on all major aspects of life: faith, laws, and morality. 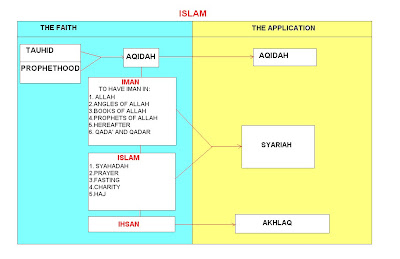 Posted by Hamirdin b Ithnin at 3:55 PM Links to this post

A DISCOURSE ON ISLAMIC STATE part(7)

This is a hadith (sayings and taditions of the Prophet Muhammad s.a.w) which summarizes the crux of Islam:

Also on the authority of 'Umar, radiyallahu 'anhu, who said:
"While we were one day sitting with the Messenger of Allah, sallallahu 'alayhi wasallam (s.a.w.), there appeared before us a man dressed in extremely white clothes and with very black hair. No traces of journeying were visible on him, and none of us knew him.
He sat down close by the Prophet, sallallahu 'alayhi wasallam, rested his knee against his thighs, and said, O Muhammad! Inform me about Islam."
Said the Messenger of Allah, sallallahu 'alayhi wasallam, "Islam is that you should testify that there is no deity save Allah and that Muhammad is His Messenger, that you should perform salah (ritual prayer), pay the zakah, fast during Ramadan, and perform Hajj (pilgrimage) to the House (the Ka'bah at Makkah), if you can find a way to it (or find the means for making the journey to it)."
Said he (the man), "You have spoken truly."
We were astonished at his thus questioning him and telling him that he was right, but he went on to say, "Inform me about iman (faith)."
He (the Messenger of Allah) answered, "It is that you believe in Allah and His angels and His Books and His Messengers and in the Last Day, and in fate (qadar), both in its good and in its evil aspects."
He said, "You have spoken truly."
Then he (the man) said, "Inform me about Ihsan."
He (the Messenger of Allah) answered, " It is that you should serve Allah as though you could see Him, for though you cannot see Him yet He sees you."
He said, "Inform me about the Hour."
He (the Messenger of Allah) said, "About that the one questioned knows no more than the questioner."
So he said, "Well, inform me about the signs thereof (i.e. of its coming)."
Said he, "They are that the slave-girl will give birth to her mistress, that you will see the barefooted ones, the naked, the destitute, the herdsmen of the sheep (competing with each other) in raising lofty buildings."
Thereupon the man went off.
I waited a while, and then he (the Messenger of Allah) said, "O 'Umar, do you know who that questioner was?" I replied, "Allah and His Messenger know better." He said, "That was Jibril. He came to teach you your religion.""
The hadith was compiled by Muslim.

Posted by Hamirdin b Ithnin at 2:37 PM Links to this post

A DISCOURSE IN ISLAMIC STATE part(6)

The word Syariah literally means 'drinking place', 'the way','water hole',etc (Sattar,1978). It is now a technical term to denote 'the civil and canonical law of Islam'. The author of this law is Allah. The syariah is the tool to administer the functionings of all creations. It deals with all aspects of life of a Muslim both religious and otherwise. Thus in anything that a Muslim does, there is a devine decree guiding it because the syriah ia a complete code of law relating to the rights and duties of a Muslim.
Distiction must be made between syariah and fiqh. Muslim scholars usually define syariah as the body of those institutions which Allah has ordained in full or in essence to guide the individual in his relationshipto Allah, his fellow Muslims, his fellow men, and the rest of the universe. It may be compared in certain respects to some denotations of the western concept of natural law (Al 'Ati, 1977, pg.13).
The term fiqh literally denotes intelligence or knowledge. Technically however, it is the name given to jurisprudence inIslam. It does not designate the principle Islamic laws that are to regulate all aspects of public and private life; rather, it is a subsidiary science of those laws.
Although fiqh is the science of syariah and can often be used synonymously, the two cocepts to the critical Muslim minds are different but actually related things. Muslims speak differently of different mazahib of fiqh, but they do not refer to syariah the same way. To them syariah is one comprehensive system of law that is devine in origin, religious in essence,and moral in scope. It does not exclude fiqh, but it is not identical with it. In contrast, fiqh is a human product, the intellectual systematic endevour to interpret and apply the priciples of syariah.
Much confusion can be avoided if the analytical distinction is borne in mind that the Islamic law encompasses two basic elements: (1) syariah- the divine, which is unequivocally commanded by Allah or His messenger s.a.w. (2) fiqh - the human, which is based upon and aimed at the interpretation and/or application of the syariah (Al 'Ati, po. cit., pg 13-15).
....................to be continued
Posted by Hamirdin b Ithnin at 9:24 PM Links to this post

A DISCOURSE IN ISLAMIC STATE part(5)

The Foundations of Islam

Islam is built on three basic foundations, the 'Aqidah (beliefs), the Syari'at (Islamic laws) and the Akhlaq(code of behaviour). The 'Aqidah is also known as Iman (faith), while the Syari'at and the Akhlaq together are known as 'amal (deeds). If the iman is unsupported by the amal, it is in fact fruitless, unauthentic and unreliable (Rahman, 1980) and sinful, while the reverse is meaningless and illogical.
'Aqidah
'Aqidah is the fundamental set of beliefs in Islam. The core of the 'aqidah is the Kalimat at Tauhid:
لا إله إلا الله
Transliterarion: La ila ha illal lah
Translation: There is no other ila but Allah
The term ila or godship, which will again be referred in parts to come, is anything which one takes as being an all-embracing, omnipotent entity which one submits to. Ila has a connotation of something that is worshipped. All forms of ila are rejected in Islam except Allah. Only Allah is THE ila. This therefore becomes the very essence of Islam, that is Tauhid, or Oneness or Unity of God.
The other constituent element of the 'Aqidah is the Kalimat ar Risalah:
محمد رسول الله
Transliteration: Muhammadur Rasullullah
Translation: Muhammad is the messenger of Allah
In this part of the 'Aqidah, one testifies that the Prophet Muhammad (peace be upon him) is the Messenger of Allah.
So to be a Muslim, one has to have the 'Aqidah, that is to testify before Allah that there is no other ila but Allah, and Muhammad is the messenger of Allah. To utter the verses of testimony in their unabridged form, the suffix أشهد أن (I bear winess to) is usally added to stamp its officility.
Once a person takes this testimony willingly and conciously and knowing fully what rights and responsilities are vested in the verses, then one becomes a Muslim.
أشهد أنلا إله إلا الله
أشهد أنمحمد رسول الله
I bear witness that there is no other ila but Allah
(and) I bear witness that Muhammad is the messenger of Allah
This is called the syahadah, and since it consists of two phrases, it is known as syahadatain. So the 'Aqidah is made up oof the syahadatain.
To assume validity, the 'Aqidah must be built on three pillars. They are: (1) tasdiq: to submit in the heart (2) iqrar bi al-lisan: to utter it in words (3) 'amal soleh: to translate it into pious devotion. When the three pillars are present in a person, then he is said to have iman (faith).
The position of a Muslim in the sight of Allah is based on his/her iman.
..................to be continued
Posted by Hamirdin b Ithnin at 12:34 PM Links to this post

A DISCOURSE IN ISLAMIC STATE part(4)

This concept here has a very profound effect on every Muslim in the sense that it guides the Muslim's conduct of behaviour known an akhlak. A Muslim is always guided by the fac that whatever things that he does will be accounted for in the akhirat, be it done in public or in private. A Muslim will be constantly guided by halal/haram injuctions and by sin/reward reminders. It must be clearly understood that in Islam, the religion is not seperated from then wprldly life, in fact Islam guides every aspect of this worldly life of man, and at the same time gides jis heavenly life as well. In modern terminology there is no seperation of the state and the religion ascompared to the present Christian dogma of seperation state and church.

Islam does not bestow absolute power to man, it only delegates it. Absolute power is only in the hands of Allah. Thus the phrase

Give Unto God What is God's

Give Unto Ceaser What is Ceaser's

is non-existent in Islam, simply because he duniawi-ukhrawi paradox holds in every aspect of life. In the more important and complex undertakings such as governing a country, or bigger still, ruling the ummah, the guidence of the deen of Islam must be incessantly invoked. Without which, the true path, that is the Path of Allah is missed.

وَيْلٌلِّلْمُطَفِّفِينَ
Woe to those
That deal in fraud
الَّذِينَإِذَااكْتَالُواْعَلَى النَّاسِيَسْتَوْفُونَ
Those who, when they
Have to receive by measure
From men, exact full measure
وَإِذَاكَالُوهُمْأَووَّزَنُوهُمْيُخْسِرُونَ
But when they have
To give by measure
Or weight to men
Give less than due
أَلَايَظُنُّأُولَئِكَأَنَّهُممَّبْعُوثُونَ
Do they not think
That they will be called
To account?
لِيَوْمٍعَظِيمٍ
On a Mighty Day
يَوْمَيَقُومُالنَّاسُلِرَبِّالْعَالَمِينَ
A Day when (all) mankind
Will stand before
The Lords of the Worlds
كَلَّاإِنَّكِتَابَالفُجَّارِلَفِي سِجِّينٍ
Nay! Surely the Record
of the Wicked is
(Preserved) in Sijjin
وَمَاأَدْرَاكَمَاسِجِّينٌ
And what will explain
To thee what Sijjin is
كِتَابٌمَّرْقُومٌ
(There is) a Register
(Fully) inscribed
وَيْلٌيَوْمَئِذٍلِّلْمُكَذِّبِينَ
Woe, that Day, to tjhose
That deny
الَّذِينَيُكَذِّبُونَبِيَوْمِالدِّينِ
Those that deny
The Day of Judgement
وَمَايُكَذِّبُبِهِ إِلَّاكُلُّمُعْتَدٍأَثِيمٍ
And none can deny it
But the Transgrassor
Beyond bounds
The Sinner!
إِذَاتُتْلَىعَلَيْهِآيَاتُنَاقَالَ أَسَاطِيرُالْأَوَّلِينَ
When Our Signs are rehearsed
To him, he says,
"Tales of the Ancients!"
كَلَّابَلْ رَانَعَلَىقُلُوبِهِممَّا كَانُوايَكْسِبُونَ
By no means!
But on their hearts
is the stain of the (ill)
Which they do
كَلَّاإِنَّهُمْعَنرَّبِّهِمْيَوْمَئِذٍلَّمَحْجُوبُونَ
Verily, from (the Light
Of) their Lord, that Day,
Will they be veiled
ثُمَّإِنَّهُمْلَصَالُوالْجَحِيمِ
Further, they will enter
The Fire of Hell
ثُمَّيُقَالُهَذَاالَّذِيكُنتُم بِهِتُكَذِّبُونَ
Further, it will be said
To them: "This is
The (reality) which ye
Rejected as false

The above surah (chapter) of the Al Qur'an clearly warns about the accountability of men inthe Day of Judgement, called the Mighty Day in this surah.Therefore it is clear now that in Islam, the duniawi undertakings as common as business dealings have the ukhrawi implications as unveiled by the verses above.

It is for this reason, the fatwa (religious decree) made by the ulamaks (the learned Islamic scholars) of the then government of the state of Kelantan in Malaysia prior to 1986 general election was a sad thing in Islam. It read: elections have no connection wih the world of the hereafter.