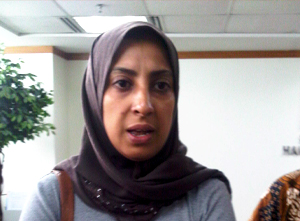 SHAH ALAM: Speculation is rife that Petaling Jaya (MBPJ) local councillor Latheefa Koya is on the chopping block.
According to a source, the proposal to sack the PKR legal bureau head came about following her strong criticism of the Selangor state government.
The source said that the proposal to expel her was tabled by Selangor Menteri Besar Khalid Ibrahim.
A state exco, who declined to be named, told FMT that the matter was raised during the exco meeting but no decision had been made.
“The process is ongoing. There has been no final word yet. We are voting on the issue,” he said.
Latheefa could not be contacted for comment.