JAKARTA, May 30 — An Indonesian and a Malaysian naval vessel have gone head to head in renewed tensions between the two sides over the disputed oil-rich Ambalat region, off Borneo.

An Indonesian naval vessel was just moments away from firing on a Malaysian warship in the waters near Ambalat earlier this week, according to an Indonesian naval spokesman who called it “one of the worst incidents” of its kind.

International Maritime Boundary: A Briefing
International maritime boundary is governed by the international law, especially the regime of the law of the sea. The United Nation even generated a convention that regulates this particular matter called the United Nation Convention on the Law of the Sea (hereinafter referred to as LOSC) in 1982. Every coastal or archipelagic State that has ratified LOSC is entitled to maritime zones measured from its baseline. Figure 1 illustrates maritime zones a coastal state may claim. 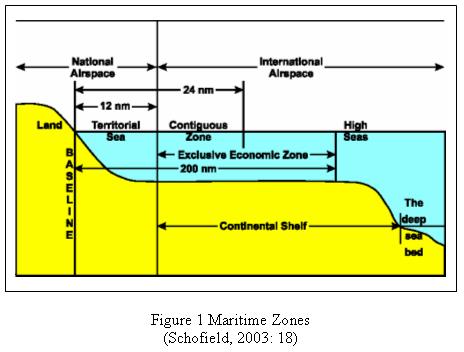 The above figure shows that maritime zones are measured form baseline to a certain distance in the unit of nautical miles (nm). Maritime zones include territorial sea at a distance of 12 nm from baseline, contiguous zone for a maximum distance of 24 mil, Exclusive Economic Zone for 200 nm and Continental Shelf that measured for a distance of no more than 350 nm from baseline4.
Imagine there are two coastal states separated in a distance of less then 300 nm each other, there will be an overlapping claim for EEZ. At this stage, a boundary line is required. See figure 2 for illustration. 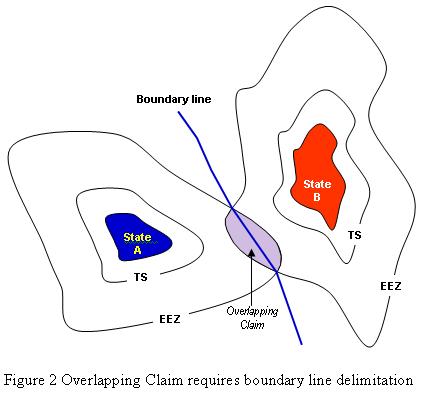 By ratifying the LOSC through the Law no. 17/1985, Indonesia obligates to define its international boundaries and depict them in a sufficient-scale nautical chart to strengthen its position. Technically, it should have started by definition of basepoints of its archipelagic baselines5, continued by the definition of internal waters, territorial sea, ZEE and Continental Shelf that are depicted in a nautical chart employing particular geodetic datum6. After that, the map must be deposited to the UN Secretary General to obtain legal recognition. This, actually, has been regulated in the Law No. 6/1996 about Indonesian Waters (Wikantika, 2005). However, Indonesia has yet finished none of the ten potential maritime boundaries with neighboring states (Tarmansyah, 2003). The neighboring states are Australia, Malaysia, Philippine, Singapore, Palau, India, Thailand, Vietnam, Papua New Guinea, and East Timor.
Since Malaysia has also ratified the LOSC (Syarif, 2005 in Kompas, 12 March 2005), the same procedures should have been proceeded. If the 1979 map Malaysia used to claim Ambalat has not yet deposited to the UN Secretary General, or even if it has not been regulated in its internal law, then Malaysia’s claim over Ambalat is not legitimate. 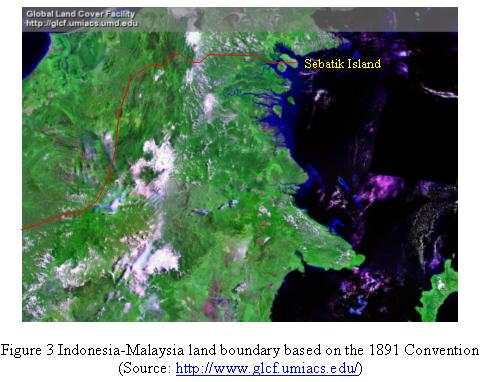 The figure illustrates that the land boundary line crosses Sebatik Island. The line crosses the latitude of 4° 10’, approximately 450 km north of equator. Unfortunately, the line stops at the eastern edge of Sebatik Island, so that the ownership of small islands and area located in the East of Sebatik is unclear. This is one of the problems causing Indonesia “loss” two islands: Sipadan and Ligitan.

The Latest Status of Indonesia-Malaysia Maritime Boundaries
The maritime boundary with Malaysia was the first one Indonesia negotiated with its neighboring State. A boundary treaty was even established and came into force on 7 November 1964 (Forbes, 2001: 74). However, the boundaries have not been fully accomplished until today. It is noted that there are three locations of maritime boundaries between Indonesia and Malaysia: Malacca Strait, South China Sea, and Celebes Sea (Prescott, 2004), where Ambalat lays. Boundaries in the first two locations have been established partially, resulting in three segments of boundary lines. The first segment is in Malacca Strait going down close to Malaysia-Singapore boundary with total distance of 400.8 nm. The second segment starts in the eastern side of Singapore Strait going up to South China Sea. The last segment is the continuation of land boundary at Tanjung Datu, the Northwest part of Borneo (Forbes, 2001: 76). Following figure illustrates the boundaries in the first two locations taken from Forbes (2001). 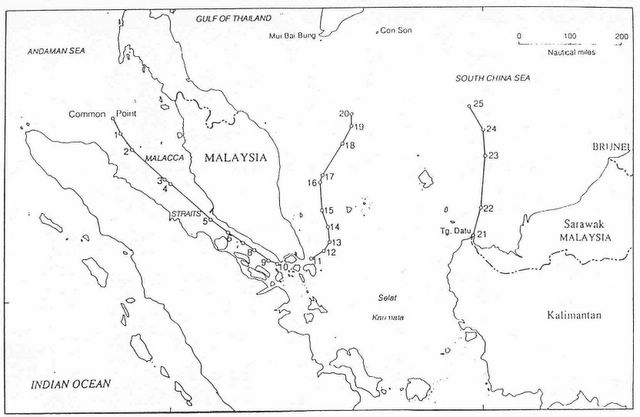 Maritime Boundary in Celebes Sea: Status and Problems
According to Villanueva (2005), the overlapping claims of territorial sea boundary, EEZ boundary and Continental Shelf boundary around Ambalat area or Celebes Sea have not yet been fully agreed. These have to be established through a bilateral negotiation between Indonesia and Malaysia. Jinangkung (2005)7 stated that Indonesia is actually ready to conduct any negotiation and even already started the negotiation on 22 March 2005 with Malaysia. Even though it seemed to be related to Ambalat case, he asserted that the negotiation was a scheduled negotiation and would generally discuss Indonesia-Malaysia unresolved boundaries in the three locations: Malacca Strait, South China Sea and Celebes Sea.
Ambalat
Many people do not precisely aware the position of Ambalat. Some even do not realize that Ambalat is not an island but water area/block located in the east of Borneo. Besides Ambalat, the block is also known as Block ND6 and ND7.
According to discussion on this matter in an internet-based community, RSGIS Forum, Ambalat is a block located in the area with coordinates of 118°15'21" - 118°51'15" E and 2°34'7" - 3°47'50" N. Having assumed that the coordinate is accurate, Ambalat lays from South to North at a distance of 65 km and 135 km from West to East. This also means that the block situates bellow the border line crossing Sebatik Island. Relative to Sipadan and Ligitan, Ambalat situates closer to Borneo. Two figures bellow respectively show the location of Ambalat and its position relative to Sipadan and Ligitan. 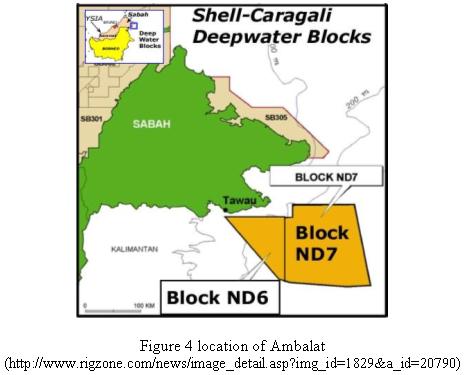 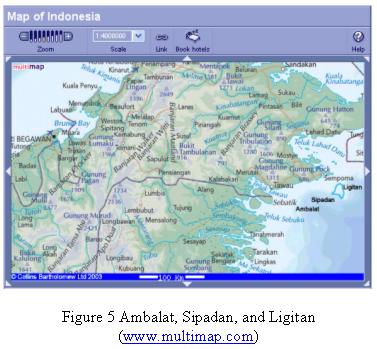 It is worth noting that the ICJ’s decision to grant Sipadan and Ligitan to Malaysia may change the configuration of Malaysia’s baselines. This can influence maritime zone it may claim. In the other words, it is highly possible for Malaysia to claim larger maritime zones southward to Indonesia. This, according to some sources, is one of the strengths for Malaysia to claim Ambalat.

Conflict Resolution: A Rough Idea
As previously mentioned, a bilateral mutual agreement between Indonesia and Malaysia is required to resolve conflict on boundary case. It is obvious that Ambalat case is a maritime conflict because Indonesia and Malaysia claim the same maritime zones (overlapping claim) where the block situates. Villanueva (2005) asserted that this is not the case of full sovereignty but limited sovereignty to explore and exploit maritime zone and natural resources deposited there. This is different compared to the case of the ownership of an island.
Before deciding to start a negotiation, Indonesia obligates to conduct comprehensive studies, which technically has to be initiated by the National Coordinating Agency for Surveys and Mapping (Bakosurtanal) and The Indonesian NAVY’s Hidro-Oceanographic Office (Dishidros TNI-AL) with coordination with the Department of Foreign Affairs.

Following are technical steps that might be considered in resolving Ambalat case.

Technical steps described above can be done by employing in situ survey or cartographically using nautical chart and satellite image in a sufficient scale.

Closing Remarks
Having considered the above analysis, it can be concluded that:

The case involving Sipadan, Ligitan, Ambalat and other similar cases related to International Boundary should have reminded Indonesia, as a nation, to seriously pay attention to maritime boundary delimitation. Another urgent step is to list small islets all over Indonesian Archipelago, and to name (toponim) every single islet. This, actually, has been conducted by the Department of Marine Affairs and Fisheries since quite a long time. To speed up the process, as opined by Wikantika (2005) Remote Sensing technology can be employed using satellite images. By finishing these all urgent “homework”, hopefully Indonesia gains more strength to preserve its sovereignty and can negotiate confidently whenever a case regarding maritime boundary arises.