Lim Kit Siang says the parliament was turned into a kangaroo court when Gobind Singh Deo was suspended for one year without pay and priviledges. I wonder what UMNO would say; when 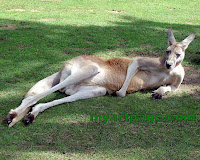 Sivakumar suspended the six ADUN in Perak, they say sue him in court!
Would they say the same thing to their Speaker?

[from Lim Kit Siang] Parliament convened as a court of justice this morning to decide the fate of DAP MP for Puchong, Gobind Singh Deo, over what transpired in Parliament last Thursday but it operated as a kangaroo court as Gobind was not even allowed the floor to defend himself.

For the first hour, Pakatan Rakyat MPs raised one objection after another against the motion to suspend Gobind for one year as MP without pay and privileges, from the propriety of the motion whether from the standpoint of the Parliamentary Standing Orders, the Houses of Parliament (Privileges and Powers) Act 1952 or the Federal Constitution, to questions including double jeopardy and sub judice but they were all brushed aside by the Speaker Tan Sri Pandikar Amin.

The Speaker also rejected the amendment by the DAP MP for Ipoh Barat, M. Kulasegaran to the motion by the Minister in the Prime Minister’s Department, Datuk Seri Nazri Aziz so as to refer Gobind to the Committee of Privileges over the charges cited in the motion: that Gobind had breached parliamentary privileges in alleging the involvement of the Deputy Prime Minister, Datuk Seri Najib Razak in the Altantuya Shariibuu murder case.

I told the House that questions about Najib’s involvement in the murder case are public interest issues, which have been raised not only in the House, but in the country and internationally.

These questions are not parliamentary contempts or parliamentary privileges, in view of the many circumstances giving legitimacy to these queries which Najib had failed to avail himself of the right to reply in the House to dismiss or clarify, including:

Pakatan Rakyat MPs staged a protest walk-out when Gobind and other PK MPs, apart from Anwar and myself, were not allowed speak in the debate – and the motion suspending Gobind for one year without pay and privileges was passed by the Umno/Barisan Nasional in Parliament.